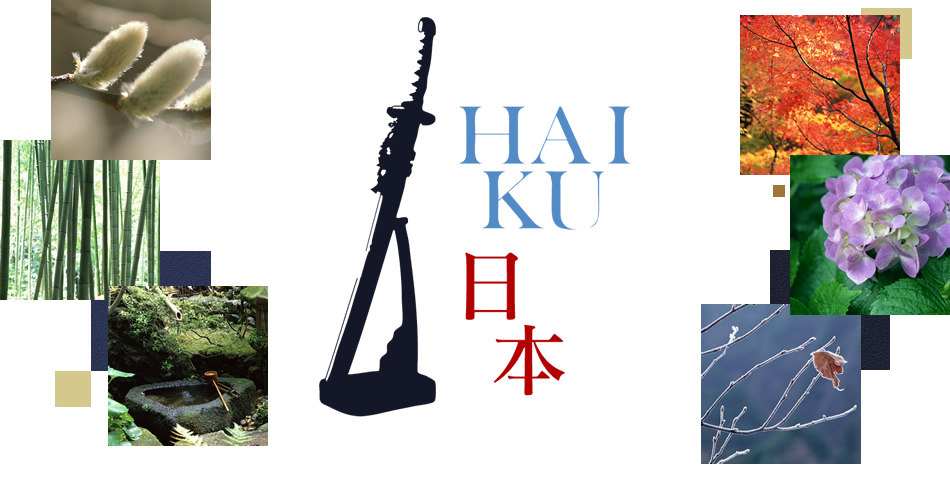 This sight is for everyone loving HAIKU in the world. HAIKU is Japanese poem. It is the shortest poem in the world.

Try to make the haiku! Followings are very famous and very good samples for you.

Our group is Not- for- Profit Organization seeking possibility of haiku and make known haiku all over the world. This is the homepage “HAIKU Japan”.

For foreigners and beginners

Important manners of the haiku are to be written one season word by all means. The haiku is said to be the literature of the sense of the seasons. It is important to catch a season above all to taste a haiku.

Eating a fruit of persimmon, the gong starts to ring from Horyuji Temple. ~Shiki Masaoka~
"Horyuzi Temple has built in 7th century, in Nara prefecture.
This is one of the most famous Buddha’s Temple in Japan. A fruit of persimmon is very popular in fall. Trees of persimmon are planted in the home garden of various places. I feel that I am connected to Buddha near myself."

Green leaves in my eyes, a cuckoo in the mountain and the first bonito on my table. ~Sodou Yamaguchi~
"This haiku is read in early summer. Leaves of trees are fresh green, in this season. A cuckoo starts to twitter in mountains. Next eyes and ears, in the mouth I eat the very good bonito."

A thin frog! Don’t lose this wrestling game .Here I am, Issa.  ~Issa Kobayashi~
"A frog is the haiku’s Season Word. A frog’s season is spring. Is this a spectacle happening before Issa’s eyes? Probably, not. Here is a thin frog. He images the wrestling of two frogs. He is cheering a thin frog. "

Rape blossoms! The moon is to the east and the sun is to the west.  ~Buson Yosano~
"Haiku’s Season Word of rape blossoms is late spring. The full moon is now just rising. In the west sky, the evening sun is setting. The Earth repeats this grand spectacle."

Falling snow! A last period of Meiji has passed very far. ~Kusatao Nakamura~
"The age of Meiji starts in 1868. In Meiji, Japan had opened a country to foreign intercourse. Seeing the snow, haiku writer felts that Meiji was good and old."

Summer weeds, here is a mark of the soldiers’ dream. ~Bashou Matsuo~.
"Bashou is around summer weeds. Summer weeds associate the war. This is not a place, but it seems a battlefield."

Come with me and play with me, a sparrow separated from the parents.  ~Issa Kobayashi~
"Issa’s haiku arrives strait to feelings of people. A sparrow is a character he always loves."

Matsushima! Oh, Matsushima. Matsushima! ~Bashou Matsuo & Bou Tahara~
"Watching a super view of Matsushima, no haiku is made. A writer repeats the name of this place. "